I didn't expect it to happen this soon-- I just thought that when the opportunity came along again, we'd have that talk.

So much has been written here and elsewhere -- so many sleepless nights spent thinking and worrying about it -- that I'd become more and more convinced that he needed to know.

I didn't want him hurt down the road.

I didn't want to hurt him now.

On Sunday, Joseph planned to go to a neighborhood park to skateboard with his friend, Sam. Katherine (Sam's mom) visited for a few minutes, before leaving her son at our house. She sat on the couch next to Sam, and opposite Joseph.

"So I think we're all set," I said, walking into the room. "The boys'll head over to the park (4 blocks away) in about half an hour. Joseph will have his supplies and my cell phone."

"You know, Sandra, that Joseph is just soooo responsible-- he really knows how to take care of himself," Katherine says, all the time smiling and looking at Joseph.

He doesn't say anything-- just sits, head down. I know he wants to go skate, and really doesn't want to talk about this stuff now.

"I'm a nurse," Katherine continues, "and I see a lot of people with diabetes. And there are two kinds. Someday, Joseph," she says, with a knowing look, "I'll tell you about them."

"What do you mean?" Joseph asks, suddenly looking a bit interested.

"Well," she begins, "there are those like you-- who take care of themselves -- and then there are the other ones."

And now my stomach is beginning to feel a little sick, and before I can say anything, Katherine continues:

"No, Mom," her son replies, shaking his head and looking slightly scared-- like maybe his mom had already given him the low-down on "the noncompliant ones."

"I think I'd better get these guys ready to go," I quickly say.

After Katherine leaves, Joseph asks me to walk to the park with him and Sam, saying:

"You can take Evan to the playground, while Sam and I skate."

Then he goes out in the backyard and sits alone on our big, old wooden swing-- while Sam plays with Evan inside, and I run around gathering what I'll need for the outing.

When I'm finally ready to go, I look out the back window and see Joseph still out there, looking like he's deep in thought. I walk outside and take a seat next to him on the swing.

It's sunny and quiet-- with the exception of a lawn mower humming from a distant neighbor's yard.

"Yeah," he says, while looking down at the ground.

"Well, I won't have to worry about that when I'm cured," he says, half-heartedly.

I take a deep breath.

"Honey, I know we've talked about this. And yes, I do still believe that a cure for diabetes will happen-- it's just that . . . well, it may be a while."

"If we spend time assuming that you'll be cured soon -- always waiting for it to happen -- we might miss out on just living, ya' know what I mean?"

I put my arm around him.

"But Mom, I really want to be cured while I'm still a kid."

And honey, I don't want to promise you it will happen soon, because" -- and this was really, really hard to tell my son -- "I can't control it."

"You have diabetes, but you're also this incredible kid who can do so many things-- who is gonna do even more amazing things."

He's looking down, but still listening.

"Yes, diabetes is a part of you-- but a small part of who you are. I'm not giving up hope for a cure, but I don't want you to think: 'Once I'm cured, I can do this or that thing.' Let's just figure out how you can do "this or that thing" right now."

"Mom, I still want to eat all those glucose tabs-- even if I"m old," he says, sounding a little sad.

For a moment I look away, trying to stop the tears-- to hold it together for just a few more minutes.

When I turn toward him again, Joseph's head snaps up, as if he just remembered something-- "Hey- can I go skate, now?"

Minutes later, we're walking to a park on a beautiful, sunny day-- talking the whole way about the park's "awesome ramps" and how Joseph is going to jump them.

Posted by Sandra Miller at 1:03 PM

Can I come visit you so I can slap your nurse friend. I hate medical care providers who call patients non-compliant. I have a post somewhere about non-compliant doctors.

And maybe talk some with your kiddo about living with chronic illness.

Oh boy, that friend really knew how to open up a can of worms.

And through tears, I'm telling you what an amazing mom you are :)

I KNOW how hard it was to have that conversation with Joseph and dreading his disappointment and sadness.

But it's so important to be able to snap out of that melancholy and live life head on...and skateboard to his heart's content like he was able to do :)

I can't imagine the man he will turn out to be as mature and resilient as he is now....I can't wait to see all of the incredible things he'll accomplish.

That makes me cry.

Boy, he sure it something else - you know that? A very special kid, mature beyond his years.

And you have played a big part in that - being a very special mom. You both have been hurt by this diabetes - but we have watched you both grow, and work through the challenges, and do great things like camp, and chess tournaments, and skateboarding, etc.

You are very right in that it is a small part of his life - and you are both doing great at it.

I really commend you, Sandra, for everything you have done with him and for him.

And thank you for sharing it with us.

The other thing you both have learned about diabetes. There are a million idiots out there who can tell you all of the half truths and crazy misconceptions they have about diabetes. It turned out quite well if you think about it. He may have questions for you, as that information absorbs a bit - but better for him to think on it and ask then to be confronted when he's on his own somewhere.

You explained it to him perfectly Sandra. I think the part about how you can't control it is very important. This disease would have been wiped out years ago if parents of diabetics could control it!

Why are so many medical professionals so insensitive? Just because they see it in their jobs they can neatly categorize diabetics into two groups. You're right, it's way more complicated than that!

Sandra, you do such a great job with him. He really does seem wise beyond his years.

I hope with all my being that he gets to eat those glucose tabs one day, and I hope I'm still around to hear you write about it.

I have a lump in my throat after reading this post - especially since this is a conversation I may have someday down the road with my daughter *sigh*.

I think you handled it beautifully. Like the others have said - Joseph is wise beyond his years - a very smart young man. I know he's going to do great things - Diabetes be damned!

And, although your nurse friend may have meant well with her conversation with her son, in my opinion she maybe shouldn't have added her two cents. My best friend is a nurse and has told me she "understands" - but she doesn't. And, you don't understand until you live it every single day. She did open up a can of worms with that comment.

That was lovely, Sandra. You are a great mom.

Thanks for writing this, Sandra - I know it must have been hard. But, your perspective - and your love for Joseph - really is a gift (between both of you - and for all of us).

I hope that when there's a cure, Joseph sits and eats those glucose tabs - and I hope he does it with the heart of the amazing young man he is - no matter how old he has grown.

Beautiful post, and I think you handled the talk really well.

And damn, if your son wants to keep eating those chalky glucose tabs when he's old, more power to him. He can do whatever he wants. (Just be sure to bolus for it if he still has to).

Sandra, Joseph is very fortunate to have a mom like you who can talk to him about all those bothersome thoughts (would you like to adopt me?)

I always seem to post the same comment everytime i read your blog but, You are such an awesome mom!

And Wow, Joseph is a sharp guy!

I can't wait until he can chow down on all those glucose tabs!

First of all, bravo to you Sandra for having that hard but necessary conversation. Bravo to Joesph for being such an awesome kid.

And big boos to your nurse-friend.

If she's someone you have any kind of a relationship with, I think it would be worth it to talk to her about why that kind of comment is utterly inappropriate.

"If she's someone you have any kind of a relationship with, I think it would be worth it to talk to her about why that kind of comment is utterly inappropriate."

And I hope Joseph feels okay with the talk and that you truly do, too. It was important.

(And whenever we get around to seeing my family back in WI, the husband can have one of those much more friendly chats than your friend the nurse with J, too.)

We're all hoping for that cure one day!

You're welcome to come by anytime :)

Those of you who commented about Sam's mom. Katherine is a kind woman who meant well. She loves Joseph, and is truly in awe of his self care.

Sadly, I think her opinions about diabetes and people with the disease are all too common.

I try to share an alternate view with her whenever possible, but yeah, it's infuriating when you hear that kind of black and white thinking about all of this...

Oh yes, quite the can of worms.

But in a way, I was glad. It's taken me nearly two years to finally get it-- I'd told Joseph (and myself) so often that it was important we keep him healthy until a cure comes, that I totally missed what those words imply.

That really, we need to just keep him healthy so he can live.

I'm not giving up hope. But I'm through waiting.

You are such a fantastic, strong mom. I can't even imagine how frustrating and scary it must be for both you and Joseph, but you both seem to cope with such grace, wisdom, and strength. My hat is off to both of you. *hugs* 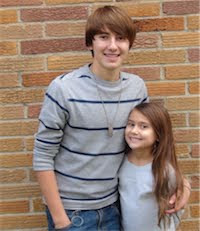 We've come a long way since then, and
I talk about it here.

Sandra Miller
I'm a mom of two children-- a 9-year old girl and a 16-year old young man. In addition, I've been vice president of a marketing company; a full-time student (English major); a product services manager for a financial publisher; a childbirth instructor and birth assistant; an aspiring sculptor; and most recently, director of information services and outreach for a non-profit government watchdog group-- in exactly that order.


This is a Flickr badge showing public photos from the diabetes made visible group pool. Make your own badge here.

Blogs by Parents of Diabetics

Some Other Really Cool Blogs